By Liu Xuanzun and Guo Yuandan 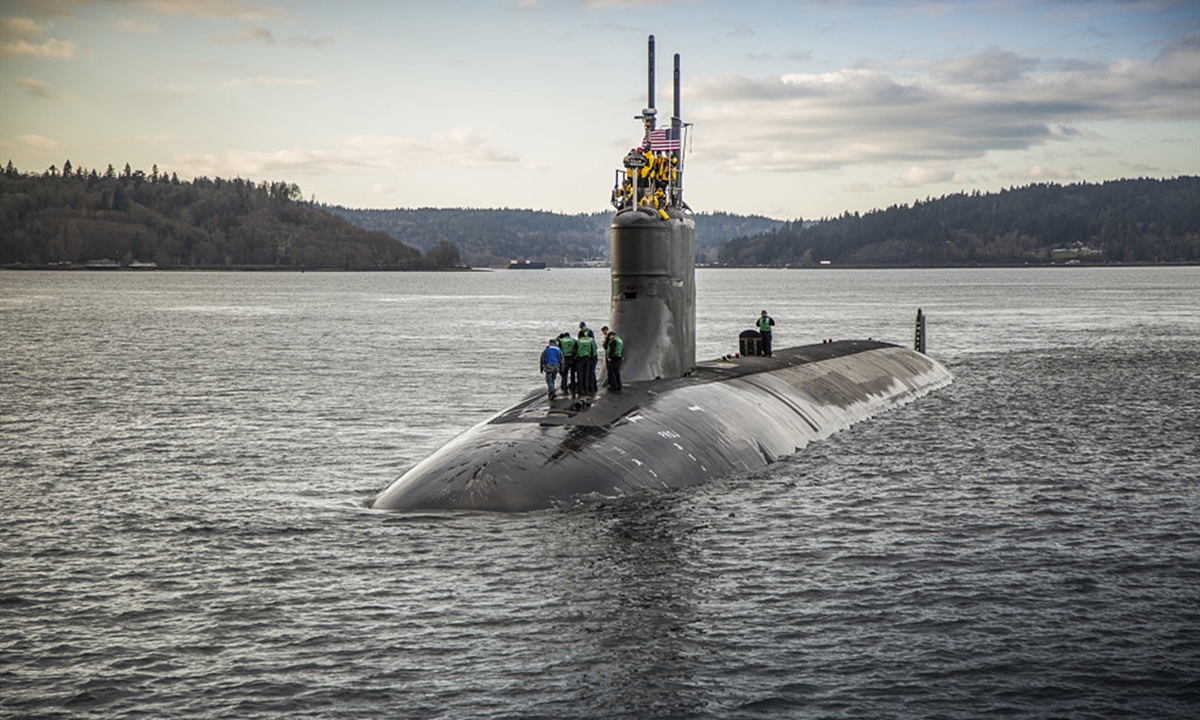 USS Connecticut File photo: VCGChina on Wednesday released a research report entitled The Nuclear Proliferation Risk of the Nuclear-powered Submarines Collaboration in the Context of AUKUS, the first report published by Chinese academic institutes to objectively analyze the serious risks of nuclear proliferation and multiple hazards caused by the AUKUS nuclear-powered submarine collaboration through detailed data and case studies.

Under AUKUS, the US and the UK are anticipated to provide Australia with eight nuclear-powered submarines involving the transfer of tons of weapons-grade nuclear materials which are enough to manufacture nearly a hundred nuclear weapons, experts warned.

Jointly released by the China Arms Control and Disarmament Association (CACDA) and the China Institute of Nuclear Industry Strategy (CINIS), the report said that the AUKUS nuclear-powered submarine collaboration has seriously violated the Treaty on the Non-Proliferation of Nuclear Weapons (NPT), marking a blatant act of nuclear proliferation.

The AUKUS nuclear-powered submarine collaboration obviously serves a military purpose, making it a direct violation of the Statue of the International Atomic Energy Agency (IAEA), the report said.

The proposed AUKUS collaboration also has other baneful effects, including having higher nuclear security risks and fueling a potential arms race in nuclear submarines, plus weakening the existing international missile export control regime because of the transfer of Tomahawk cruise missiles, according to the report.

On the announcement of AUKUS, the three countries emphasized that the US and the UK would not only assist Australia in building nuclear-powered submarines, but also provide it with long-range precision-strike capabilities including Tomahawk cruise missiles. The Tomahawk is an offensive nuclear-capable weapon developed by the US and has been deeply marked by US militarism since its inception. The deal this time will involve the latest version of the Tomahawk, with a range of 1,700 kilometers, far exceeding the maximum limit of the Missile Technology Control Regime (MTCR), despite the US, the UK and Australia being members and major advocates of the MTCR.

The report called on the international community to take joint actions to safeguard the global nuclear nonproliferation regime.

AUKUS is a new political and military alliance jointly created by the US and a few countries following the Five Eyes Alliance and the QUAD serving the US’ “Indo-Pacific Strategy,” which aims to provoke regional confrontation and splitting-up. It is engaged in a geopolitical zero-sum game, bringing new destabilizing factors to the international and regional situation, said Zhang Yan, president of the CACDA, at a press conference for the release of the report on Wednesday.

AUKUS involves a major and highly sensitive issue, which is the transfer of weapons-grade nuclear materials, Zhang said.

Weapons-grade nuclear materials are the basis for nuclear weapons. Both the US and the British nuclear-powered submarines use weapons-grade highly enriched uranium, Li Chijiang, CACDA vice president and secretary-general, told the Global Times on Wednesday at the press conference.

According to experts’ analyses, the US and the UK will build eight nuclear-powered submarines for Australia, involving the transfer of tons of weapons-grade nuclear materials enough to manufacture nearly a hundred nuclear weapons, marking the first time since the NPT came into force that nuclear-weapon states will transfer a large amount of weapons-grade nuclear materials to a non-nuclear-weapon state, setting a bad example and creating a serious risk of nuclear proliferation, Li said.

The AUKUS collaboration will damage the global strategic balance and stability, encourage other countries to join the nuclear arms race, escalate geopolitical tensions and bring the Asia-Pacific region to a wrong path of confrontation and splitting-up, completely opposite to the common appeal for development and prosperity by countries in the region, Li said.

“It is our hope that this report will facilitate China and the international community to accurately and comprehensively understand the situation, and communicate from an academic perspective the concerns of Chinese think tanks and scholars over nuclear proliferation risks and their commitment to safeguarding world peace and stability,” said Pan Qilong, chairman of the CINIS, at the press conference.

The US, the UK and Australia should respond to the concerns of the international community, carry out international obligations of nuclear nonproliferation, and cancel the wrong decision for the collaboration on nuclear-powered submarines, said Wang Wenbin, a spokesperson at China’s Ministry of Foreign Affairs, at a routine press conference on Wednesday, commenting on the research report.