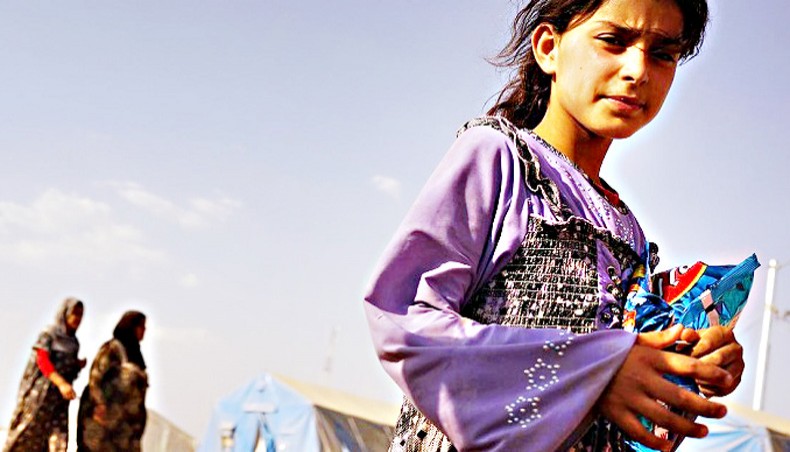 DESPITE the breakthrough after a year of domestic crisis, now that all the top leadership of Iraq has been elected and appointed, including the parliament, the president, the prime minister, and the government, political stability in the country is far from certain this year. And to a large extent, the United States is to blame for this, the 20th anniversary of the invasion by which the tortured Iraq will ‘celebrate’ in two months. During the American aggression and subsequent domination, not only the economy and infrastructure were destroyed, and up to half a million Iraqis were killed, but the entire state structure was wrecked, which plunged the country into political chaos for many years.

The Iraqi agency Shafaq news noted that for almost two decades, the country was shaken by a protracted political crisis, and it suffered from an insurgency that tore it apart. The crisis has also been exacerbated by government dysfunction and widespread corruption, while the country’s oil-based economy has been severely affected by unprecedented mismanagement, thus resulting in severe financial losses for the population. And all this, Shafaq news concludes, is a shameful legacy of the invasion and aggression by the United States, which left the country in the most severe crisis and decline.

Although the fragile political system remains the main driving force, the country’s security problem remains a component determining the future of Iraq, as events on the ground further complicate the situation. In the coming months, Iraq will have to face the unpredictability associated with the consequences of the domestic conflict for the shaky policy of the country, the welfare of its population and relations with neighboring countries.

In the near future, all attention will be focused on the new government of prime minister Mohammed Shia Al-Sudani and whether it will be able to cope with numerous disturbances and subsequent public discontent. Similar to the seven prime ministers who have been in power over the past twenty years, Al-Sudani has solemnly promised to reform the economy, fight corruption, improve deteriorating public services and fight poverty and unemployment. In his address to Parliament after his approval, he also promised to amend the election law within three months and hold early parliamentary elections within a year.

On November 27, 2022, Al-Sudani demonstrated his anti-corruption efforts by appearing on local television and artfully positioning himself in the spotlight among a pile of Iraqi banknotes, while he announced the return of about $126 million after $2.5 billion had been stolen from the state treasury. However, many Iraqis remain skeptical of Al-Sudani’s anti-corruption measures and doubt whether they will be effective in ending the practice, which was promoted by some of the highest institutions of the government and the ruling elites of the country.

Corruption continues to damage Iraq and impedes the establishment of the principles of democracy, development and the ability to lift people out of poverty. The country ranks lowest in the international Corruption Perception Index being at the bottom of the list of 180 countries surveyed for the presumed level of corruption in the public sector. And this happens in the context of the richest oil reserves, revenues from which exceeded $115 billion last year, which is 52 per cent, or 1.5 times more than in 2021 ($75.65 billion).

The failure of public services remains a sign of government dysfunction in Iraq, despite the fact that the public sector employs millions of people and accounts for about 40 per cent of the annual budget. Two decades of mismanagement and rampant corruption have led to the fact that health care, education and the municipal sector have declined amid a serious crisis with water supply and electricity. The effects of poor economic policies and corruption on workers have been severe in both the public and private sectors, leaving many Iraqis unemployed, vulnerable to poverty and struggling to pay for food and other necessities.

According to the ministry of planning, while the unemployment rate in Iraq is 14.19 per cent of the work force, the poverty rate in the country is 24.8 per cent. These trends indicate that the Al-Sudani government may and most likely will face problems that will have negative consequences for further social unrest. Unemployment is especially widespread among young people, who make up the majority of the population. Many young Iraqis go to work either in the rich countries of the Persian Gulf or in Europe, especially in the north of the continent, i.e. in Sweden and Norway, whose legislation is very loyal to the Kurdish population.

One of the key problems facing Iraq today is climate change, which has exposed the country to such disasters as desertification and acute water shortage. The waters of the Tigris, Euphrates and a number of other smaller rivers are no longer sufficient for the needs of agriculture and urban services. Despite all the talk that the problem is largely the result of global warming, poor governance and inadequate solutions in this area are also largely responsible for the aggravation of the crisis, which threatens the stability of the country in the near future.

About five years after the declaration of victory over the so-called ‘caliphate’ of Daesh, the country is still struggling with this terrorist organization, and the problems of returning and reintegrating those who had a connection with this group in the past to their hometowns. Although terrorists no longer control Iraqi territory, they continue to pose a security threat through kidnappings, attacks and bombings, especially in desert areas on the outskirts of the country’s major Sunni cities. Currently, former members of Daesh and their families are in the Al-Khol refugee camp in Syria under the control of US-backed Kurdish groups. The Iraqi government fears that such returnees will be able to create ‘incubators’ where they can regroup and return to destabilize the country.

The crucial question this year will be whether the Shiite cleric Muqtada Al-Sadr and his Sadrist movement decide to take part in the parliamentary elections, which Al-Sudani has promised to hold within a year. Al-Sadr suspended his participation in politics in response to the impasse with the formation of the government after his group had won the largest number of seats in parliament according to the results of last year’s poll. If the Sadrists stay away from the elections, this decision will probably be the biggest powder keg in Iraqi politics that has ever been. Iraq may witness the election of a new legislative body that will completely change the structure of its political system. However, if the Sadrists do decide to take part in the elections, this could be another opportunity for Al-Sadr to try to get the majority of seats he needs to form a ruling coalition that could weaken the pro-Iranian camp in the country.

Another potential flashpoint to watch out for in 2023 will be the deterioration of relations between the two main political parties of Iraqi Kurdistan, i.e. the Kurdistan Democratic Party and the Patriotic Union of Kurdistan. A fierce power struggle has been going on between the two rivals for several months, and fears are growing that they are moving towards a new round of violence, according to the Kurdish Rudaw news agency, which has characterized their relationship for decades as ‘a relationship of envy and rivalry.’

In its foreign policy, the Al-Sudani government will still have to balance the preservation of Iraq’s sovereignty, the ambitions of its neighbors and the interests of its international partners on various issues. Iran is expanding its influence in Iraq due to the fact that the Shiite Alliance ‘coordination structure’ consisting of Iranian-backed groups enjoys great political influence after it managed to bring the current government to power. Since Al-Sudani came to power in October 2022, the Alliance’s leaders have played a key role in managing national policy, and its pro-Iranian factions have restored their members to key positions in the government and security agencies. In order to increase its chances in the next elections, the Alliance plans, according to the Sky News newspaper, to introduce a new election law, which is designed to increase the number of its seats in the next parliament.

As a result of a major shift in Baghdad’s relations with the Kurdistan regional government in the north of the country, Tehran also managed to convince both sides to agree to the deployment of Iraqi army units along the border between Iran and the federal region of Iraq. They are designed to guard the border, which, according to the Islamic republic, was used by opposition groups to provoke problems between the two states.

Another foreign policy problem facing Al-Sudani is Turkey’s growing military aggression in northern Iraq, which violates its sovereignty and increases its instability. For several months, the Turkish military has been carrying out airstrikes and ground incursions into the region, while claiming to be pursuing Turkish Kurdish militants who, according to them, are using Iraqi territory to carry out attacks on Turkey. However, it should be noted that Turkish aggression is part of Ankara’s expansionist policy in Iraq and regional ambitions that were formed after the US invasion of Iraq in 2003. As a result of the American aggression, the balance of power in this region was disrupted, which allowed Ankara to act at its discretion, despite Baghdad’s official protests.  While its presence in northern Iraq is aimed at pacifying the Kurds, Turkey is also targeting Sunni Muslim political groups and the Iraqi Turkuman minority in order to turn them against the central Shiite government in Baghdad.

Iraq’s relations with other neighbors and international partners will continue to depend on its stability and on whether the strategic interests of all parties are respected. To this end, the world will continue to closely monitor this new stage in Iraq’s regional relations. Under the previous government of Mustafa al-Qadimi, Iraq has already concluded various agreements with some regional and foreign countries. Al-Sudani has not yet expressed his intention to maintain meaningful ties with these countries in order to balance Iran’s growing influence in Iraq and raise Baghdad’s international prestige.

One of the key trends to pay attention to in the coming year will be Iraqi-American relations. The Iranian-backed political parties in Iraq, which now control the government and want Tehran to become a pillar in Iraq, are not very interested in developing ties with Washington. This caused not only a wave of concern, but also indignation in the United States, which seemed to be annoyed that Iraq had failed in its attempts to bring the Al-Sudani government closer to the United States and its allies, while continuing to focus on the tensions between the United States and Iran playing out on Iraqi soil. Washington is resorting to new tactics, while questioning the activities of Iranian proxies in the Iraqi government and using the carrot and stick policy towards Al-Sudani to promote a new dynamic affecting US-Iraqi relations. While the US is offering the Al-Sudani government partnership in fighting corruption, overcoming the climate crisis and helping with economic reforms, it has also blacklisted Iraqi government ministers and officials associated with pro-Iranian militants.

In today’s turbulent times, Iraq continues to face old and new challenges. However, given its trajectory of development since the US aggression in 2003, it seems likely that this already tired nation will remain in a vicious circle of instability and crisis. And as long as Washington pursues its selfish policy of protecting only its interests to the detriment of Iraq, it is unlikely that the Iraqis will be able to radically reverse the situation that has developed negatively for them.