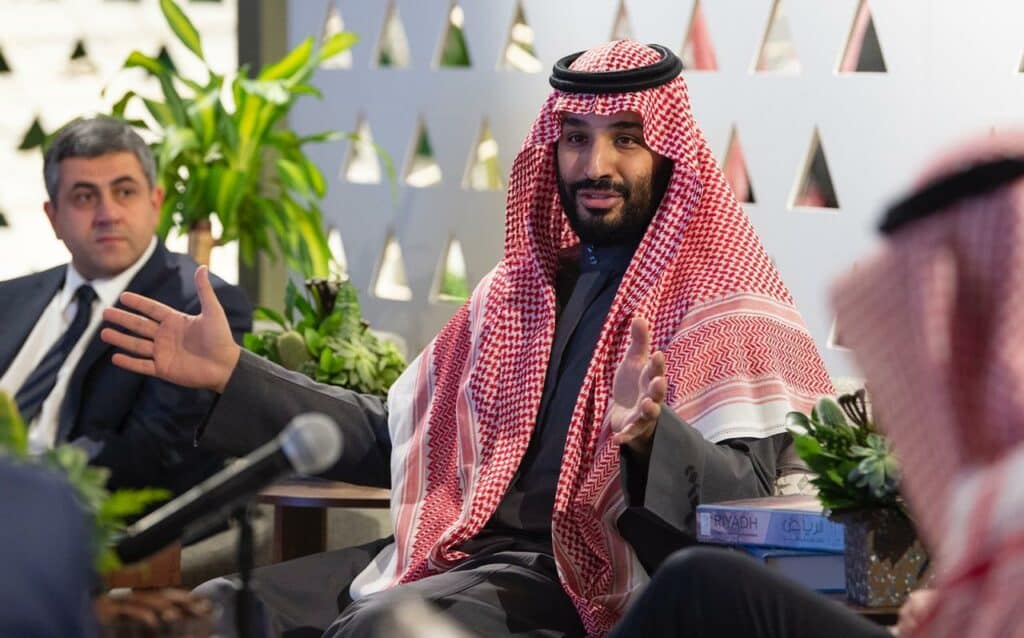 Saudi Crown Prince Mohammed bin Salman in 2019. In a 2018 CBS News interview, the crown prince said that his country would obtain a nuclear weapon if Iran does.

Iran’s nuclear program, oil, and human rights dominated Biden’s much-anticipated first presidential trip to the Middle East earlier this month. But there is one topic President Biden chose not to showcase during his visit with Saudi Crown Prince Mohammed Bin Salman Al Saud—the Kingdom’s most recent interest in nuclear energy—and the nuclear weapons proliferation concerns that come with it.

Only weeks before Biden’s visit, Riyadh invited South Korea, Russia, and China to bid on the construction of two large power reactors. On that bid, Korea Electric Power Company (KEPCO) is the most likely winner. KEPCO has already built four reactors for Riyadh’s neighbor, the United Arab Emirates, and is the only vendor to bring a power reactor of its own design online in the Middle East. South Korea also is the only government to provide reliable, generous financing, free of political strings—something neither Moscow nor Beijing can credibly claim.

And then, there’s this: Any Korean sale would be covered by a generous 2011 South Korean nuclear cooperative agreement with Riyadh that explicitly authorizes the Saudis to enrich any uranium it might receive from Seoul. Under the agreement, Riyadh could enrich this material by up to 20 percent, without having to secure Seoul’s prior consent.

That should set off alarm bells.

Do the Saudis want a bomb? In 2018, Crown Prince Mohammed Bin Salman announced that “if Iran developed a nuclear bomb, we will follow suit as soon as possible.” As if to prove the point, late in 2020, word leaked that the Saudis have been working secretly with the Chinese to mine and process Saudi uranium ore. These are steps toward enriching uranium—and a possible nuclear weapon program.

Unlike the Emirates, which legally renounced enriching uranium or reprocessing spent fuel to separate plutonium, the Kingdom insists on retaining its “right” to enrich. Also, unlike most members of the International Atomic Energy Agency (IAEA), Saudi Arabia refuses to allow intrusive inspections that might help the IAEA find covert nuclear weapons-related activities, if they exist, under a nuclear inspections addendum known as the Additional Protocol.

Saudi Arabia’s enrichment program and refusal to adopt the Additional Protocol, doubled with a possible permissive South Korean reactor sale, could spell trouble. South Korea currently makes its nuclear fuel assemblies using imported uranium, which mainly comes from Australia. This ore is controlled by Australia’s uranium export policy, which requires that the uranium be monitored by the IAEA and that materials derived from it not be retransferred to a third country without first securing Australia’s consent. Yet, if Seoul decides to pass Australian uranium on to Riyadh, the Saudis are free to enrich it up to 20 percent at any time without having to secure anyone’s approval. In addition, Riyadh could proceed to enrich this material without having to agree to intrusive IAEA inspections under the Additional Protocol, making it easier for Riyadh to enrich beyond 20 percent uranium 235 without anyone knowing.

Can Washington block the reactor export? In Washington, the US nuclear industry understandably is miffed that Riyadh excluded Westinghouse from bidding on the Saudi reactors. Meanwhile, State Department officials say that KEPCO can’t sell Riyadh its APR-1400 reactor because it incorporates US nuclear technology that is property of Westinghouse. KEPCO, they insist, would first need to secure US Energy Department approval under US intangible technology transfer controls (known as Part 810 authorizations). This requirement, they argue, gives Washington the leverage it needs to impose nonproliferation conditions on South Korea’s reactor export to Riyadh.

This sounds fine. But there’s a catch. South Korean officials insist that its APR-1400 design, which uses a Combustion Engineering data package that Westinghouse now owns, is entirely indigenous. Focusing on the matter of technology transfer authority also begs a bigger question: Does the Republic of Korea need Washington’s blessing to begin enriching uranium itself or to transfer enrichment technology to other countries, such as Saudi Arabia?

NPT Review Conference: Will it rise to the proliferation challenges?

The short answer is no.

South Korea has always been free to enrich uranium and transfer uranium enrichment technology to other countries so long as the uranium it enriched or the enrichment technology it shipped wasn’t of US origin. America’s veto over South Korean enrichment only applies to uranium that comes from the United States. As I learned from a recent interview of the two top negotiators of the 2015 US-Republic of Korea civilian nuclear cooperation agreement, Seoul has always known this. Yet, South Korea asked that Washington explicitly grant it authority to enrich uranium in the 2015 agreement—something Washington has yet to grant. According to the negotiators, South Korean officials preferred to have political permission from Washington to do so, even though they did not legally need it.

South Korea and the United States have a choice. South Korea’s previous administration under President Moon Jae-in announced in 2021 that South Korea would not export reactors to countries that had not yet agreed to adopt the IAEA’s Additional Protocol. Is this pledge one that President Yoon Suk-yeol will uphold? Or will Yoon reverse this policy in his effort to go all out to secure the reactor sale to Riyadh?

Similarly, how committed is the Biden Administration to prevent Saudi Arabia from enriching uranium and reprocessing spent reactor fuel? Previous administrations have tried to keep Riyadh clear of such activities. Will Washington keep Seoul’s and Saudi Arabia’s feet to the fire on this or will the administration’s desire to close ranks with South Korea and Saudi Arabia push these nonproliferation concerns to the sidelines? Anyone interested in preventing the further spread of nuclear weapons in the Middle East should want to know the answers.

The Year of the Sixth Seal (Revelation 6:12)

20 years ago the Prophecy was opened by Bush: Revelation 13