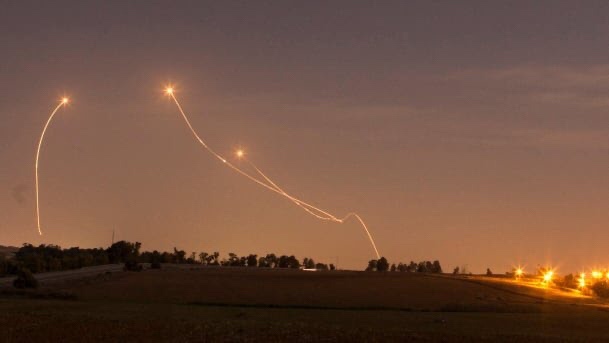 Israeli authorities say rockets fell in open areas, with no casualties or damage caused ■ Incident comes as tensions rise over Israel’s plan to annex part of the West Bank

The Israeli army struck Hamas targets in the Gaza Strip on Friday after two rockets were launched from the coastal enclave at southern Israel.

The launch triggered rocket alert sirens in several Israeli communities along the border.

The statement added that among the targets hit were “a workshop to produce rockets as well as infrastructure used to manufacture weapons for Hamas. Striking those targets harms Hamas’ capabilities.”

“The IDF gravely views any hostile activity carried out against Israel, and will continue to operate as long as it takes against attempts to harm Israel’s citizens,” the statement read.

“The IDF considers this incident with severity and holds the terrorist organization Hamas responsible for everything that takes place within the Strip and emanates from it,” the statement added.

The Shaar Hanegev regional council later said that the rockets fell in an open area, with no casualties or damage caused.

Earlier, Palestinian media outlets reported that the IDF struck a Hamas outpost in the central Gaza Strip, and that the Israeli navy fired flares near Khan Younis.

About two weeks ago, Israel struck targets in the Strip after a rocket was launched from it at southern communities, in a first since early May.

The Israeli army reported the launch, which it said triggered no rocket alert in border communities, providing no further details.

The IDF spokesperson said in a statement that in response, Israeli aircraft targeted “infrastructure used for underground activity” by Hamas in southern Gaza and tanks struck several of the organization’s military outposts.

According to Palestinian media reports, the military targets that were struck are located east of Khan Yunis, in southern Gaza.

There were no immediate reports of any casualties or damage caused by the rocket launch.

The incident came amid increased tensions in the region as Prime Minister Benjamin Netanyahu continues to push through with the controversial decision to annex parts of the West Bank as early as July 1.