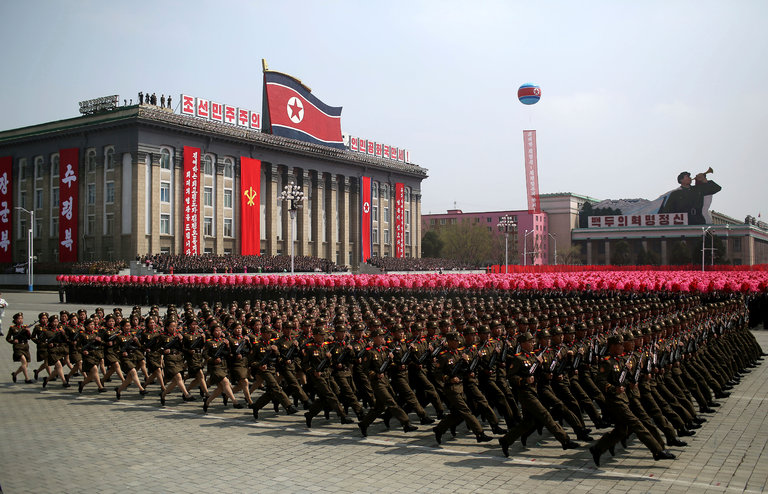 WASHINGTON — In some of the most conciliatory remarks to North Korea made by the Trump administration, Secretary of State Rex W. Tillerson complimented the government in Pyongyang for going more than two weeks without shooting any missiles or blowing up any nuclear bombs.
“I’m pleased to see that the regime in Pyongyang has certainly demonstrated some level of restraint,” Mr. Tillerson said, suggesting that the brief pause in testing may be enough to meet the administration’s preconditions for talks.
“We hope that this is the beginning of the signal we’ve been looking for,” he said, adding that “perhaps we’re seeing our pathway to sometime in the near future of having some dialogue. We need to see more on their part. But I want to acknowledge the steps they’ve taken so far.”
That was the carrot. As for the stick, the Trump administration announced new sanctions against China and Russia on Tuesday as part of its campaign to pressure North Korea to stop its development of nuclear weapons and missiles.
The two moves are part of the Trump administration’s dual-track strategy for taming the nuclear threat from North Korea — ratcheting up economic pressure on the government through sanctions while simultaneously offering a diplomatic pathway to peace.
That second approach has gradually softened in recent months. In his first trip to Seoul, South Korea, in March, Mr. Tillerson appeared to make North Korea’s surrender of nuclear weapons a prerequisite for talks. At that time, he said that negotiations could “only be achieved by denuclearizing, giving up their weapons of mass destruction,” and that “only then will we be prepared to engage them in talks.”
In recent months, he has suggested that Pyongyang only had to demonstrate that it was serious about a new path before talks could begin, suggesting that a significant pause in the country’s provocative activities would be enough. And three weeks ago, he went out of his way to assure the North’s leaders “the security they seek.”
Then, a little more than two weeks ago, the United Nations Security Council passed its toughest sanctions yet against North Korea. And the next day, Mr. Tillerson met with his counterparts in South Korea and China in an effort to increase pressure on Pyongyang.
The United Nations sanctions were already starting to have an impact curtailing trade in China and infuriating Chinese seafood importers, who had to return goods to North Korea.
Mr. Tillerson’s remarks Tuesday were particularly noteworthy because they were made in a news conference that was otherwise devoted to discussing the Trump administration’s new approach to the war in Afghanistan.
There is fierce debate in the administration over what course to take with North Korea — and whether a combination of diplomatic outreach and military threats would change North Korea’s current direction. Tension between the United States and North Korea has escalated over North Korea’s recent missile tests. Most intelligence assessments have concluded that the North has no incentive to begin negotiations until it demonstrates, even more conclusively than it has in recent weeks, that its nuclear weapon could reach the United States mainland.
But Mr. Tillerson’s diplomatic outreach has been repeatedly undercut by President Trump’s bellicose rhetoric, including a threat to unleash “fire and fury” against North Korea if it endangered the United States.
The new sanctions issued by the Treasury Department affect six individuals and 10 organizations with financial ties to Pyongyang’s weapons program. They represent a gradual increase in pressure on China, which has long frustrated the United States for economically supporting the regime in Pyongyang. Some 90 percent of North Korea’s trade is with China.
“It is unacceptable for individuals and companies in China, Russia and elsewhere to enable North Korea to generate income used to develop weapons of mass destruction and destabilize the region,” Steven Mnuchin, the Treasury secretary, said in a statement on Tuesday.
In June, the Trump administration imposed sanctions on a Chinese bank, a Chinese company and two Chinese citizens to crack down on the financing of North Korea’s weapons program, the first set of secondary sanctions against North Korea that directly targeted Chinese intermediaries.
“I think it’s a significant action by the Trump administration,” Anthony Ruggiero, a senior fellow with the Foundation for Defense of Democracies, a nonprofit group in Washington, said of the new round of sanctions.
Tuesday’s actions appeared to be part of a larger campaign to pressure individuals, businesses and countries with financial ties to North Korea, said Mr. Ruggiero, a former official in the Office of Terrorist Financing and Financial Crimes at the Treasury. “It looks like the beginnings of a broad pressure campaign,” Mr. Ruggiero said.
Among the Chinese companies sanctioned on Tuesday is Mingzheng International Trading Limited, considered by the Treasury Department to be a “front company” for North Korea’s state-run Foreign Trade Bank, which has been subject to American sanctions since 2013.
In June, United States prosecutors accused Mingzheng of laundering money for North Korea and announced that the Justice Department would seek $1.9 million in civil penalties.
The new United States sanctions address how other nations tolerate North Korea’s behavior, particularly China, said Elizabeth Rosenberg, a senior fellow at the Center for a New American Security in Washington.
“These sanctions expand the U.S. blacklist for companies tied to North Korea’s economic activity and are designed to curb the hard currency available to Pyongyang,” Ms. Rosenberg said in an email. “I think we should expect more sanctions of this nature, including more designations to highlight the role of China to enable North Korea’s illicit aims.”

The science behind the sixth seal: Revelation 6:12

The Russian Horn Will Use Nukes: Revelation 16

Why Putin will soon have to nuke Ukraine: Revelation 16