Skip to content
Iraq’s influential Shia leader Muqtada al-Sadr has made a rare visit to Saudi Arabia, where he met Crown Prince Mohammed bin Salman and other officials.
Sadr’s office released a statement on Sunday, saying he had been invited to the kingdom.
He was greeted by Thamer al-Sabhan, Saudi Arabia’s former ambassador to Iraq, on his arrival in the kingdom on Sunday.
Sadr, who last visited Saudi Arabia in 2006, attended “discussions of common interest” during his trip to the Red Sea port city of Jeddah, Saudi state news agency SPA reported.
“We have been very pleased with what we found to be a positive breakthrough in the Saudi-Iraqi relations, and we hope it is the beginning of the retreat of sectarian strife in the Arab-Islamic region,” a statement from Sadr’s office said.
Iraq and Saudi Arabia agreed last month to set up a coordination council to upgrade strategic ties as part of an attempt to heal troubled relations between the Arab neighbours.

Saudi Arabia reopened its embassy in Baghdad in 2015 following a 25-year break.
In February this year, Adel al-Jubeir made a rare visit to Baghdad, marking the first official visit by a Saudi foreign minister to Iraq since 1990.
Iraq lies on the faultline between Shia Iran and Sunni-ruled Arab Gulf monarchies.

Saudi Arabia is concerned about the influence of its rival Iran in Iraq, which backs Shia fighters battling the Islamic State of Iraq and the Levant (ISIL) group there.
Sadr is among those who have called for the Shia fighters to be disbanded.
Sadr, an anti-American Shia leader, commands a large following among the urban poor of Baghdad and the southern cities, including Saraya al-Islam, or Peace Brigades militia.
He had lost some of his political influence in recent years but has brought himself back into relevance by calling for demonstrations to push for reforms

But not so with Pakistan. The resignation of Nawaz Sharif raised eyebrows at the State Department and the Pentagon, but little else. The Pakistani military is largely viewed as the real source of power in Islamabad, and that is not going to change with a new Prime Minister.
Still, Mr. Sharif’s removal comes as the White House is trying to determine a strategy for Afghanistan that officials say has stalled amid concerns about how to deal with Pakistan, where both the Taliban and the Haqqani network have a sanctuary. The White House has held up a Pentagon request to send additional troops to Afghanistan while officials grapple with how much pressure to put on the Pakistani government to crack down on the groups.
‘No key action’
The Pakistani government has “failed to take significant action” to prevent those groups from threatening U.S. and Afghan forces in neighbouring Afghanistan, the State Department said last week in a report on terrorism. And Pentagon officials are withholding $50 million in military reimbursements to Pakistan for the fiscal year that ended in October 2016, signalling displeasure with Islamabad’s failed efforts against the Haqqani network, a ruthless wing of the Taliban based in Pakistan.
Taliban’s sneak attack
U.S. and Afghan officials are still raw from a Taliban sneak attack in April that killed more than 160 soldiers at an Afghan military base in northern Afghanistan’s Balkh province, the single deadliest Taliban assault of its long war against Afghan forces.
Blaming the attack on the Haqqani network, U.S. military officials said the attack, which led to the firing of Afghanistan’s Defence Minister and the Afghan army’s chief of staff, was planned over four to six months and was too sophisticated and calculated to have been conducted by other branches of the Taliban.
Mr. Sharif’s exit means that General Qamar Javed Bajwa, the Pakistani army’s chief, assumes an even bigger role. For some in U.S. security circles, that is a relief. The military has always controlled the country’s nuclear arsenal, and stability within that military structure means fewer worries that amid the country’s political turmoil, its nuclear weapons could fall into the wrong hands.NYT

PTI|
Updated: Jul 30, 2017, 02.51 PM IST
BEIJING: Chinese military today showcased five models of its homemade conventional and nuclear missiles in a massive military parade, marking the 2.3-million strong People’s Liberation Army’s 90th founding anniversary.
The models include the Dongfeng-26 ballistic missile, which can be fired at short notice and fitted with a nuclear warhead, the Dongfeng-21D land-based anti-ship ballistic missile described as a “carrier killer” and the Dongfeng-16G conventional missile designed for precision strikes against key enemy targets.
Also on display were two types of solid-fuel inter- continental strategic nuclear missiles, which rumbled on top of long-bed missile launchers, state-run Xinhua news agency reported.
The equipment and soldiers driving the mobile launch vehicles came from the PLA‘s Rocket Force, which was established in December 2015 as part of the PLA’s extensive military structural reform.
The predecessor of Rocket Force, the Second Artillery Force, was founded on July 1, 1966.
China’s latest J-20 stealth fighters made their parade debut in north part.
Three J-20 jets led an echelon formation consisting of 15 fighter aircraft which roared over the Zhurihe military training base in Inner Mongolia Autonomous Region during the country’s first-ever Army Day parade.
The J-20 is China’s indigenous fourth-generation medium and long-range fighter jet. It made its maiden flight in 2011 and was first publicly displayed at the 11th Airshow China in Zhuhai, Guangdong Province, in November last year.
“The enlisting of fourth-generation jets will bring fundamental changes to the rules of the game in air battlefield,” said Wang Mingzhi, a professor with the PLA Air Force Command College.
“It will also draw the curtain on transformation in the PLA Air Force,” Wang said.
Besides J-20, J-16 fighters and Y-20 heavy transport aircraft were also among the new aircraft making parade debuts today.
The J-16 is a two-seat, dual-engine multi-role fighter with beyond-visual-range air-to-air and air-to-ship strike capabilities.
The Y-20 plane with a maximum take-off weight of about 200 tonnes, is designed to carry cargo and personnel over long distances in complicated meteorological conditions. It officially entered military service in July, 2016.
The PLA was founded on August 1, 1927 when the ruling Communist Party of China under the leadership of Mao Zedong carried on with his national liberation movement.
The parade was held in the backdrop of over month-long standoff between Indian and Chinese troops at Doklam in Sikkim section.
Besides Doklam, China is also concerned by the situation in North Korea and the deployment of Terminal High Altitude Area Defence (THAAD) missile by the US in South Korea much to the opposition of the Beijing.
New York City Is Overdue For Large Earthquake: Seismologist

New York City could start shaking any minute now.Won-Young Kim, who runs the seismographic network for the Northeast at Columbia University’s Lamont-Doherty Earth Observatory, said the city is well overdue for a big earthquake.
From Metro New York:
The last big quake to hit New York City was a 5.3-magnitude tremor in 1884 that happened at sea in between Brooklyn and Sandy Hook. While no one was killed, buildings were damaged.
Kim said the city is likely to experience a big earthquake every 100 years or so.
“It can happen anytime soon,” Kim said. “We can expect it any minute, we just don’t know when and where.”
New York has never experienced a magnitude 6 or 7 earthquake, which are the most dangerous. But magnitude 5 quakes could topple brick buildings and chimneys.
Seismologist John Armbruster said a magnitude 5 quake that happened now would be more devastating than the one that happened in 1884.
“Today, with so many more buildings and people … we’d see billions in damage,” Armbruster said. “People would probably be killed.” 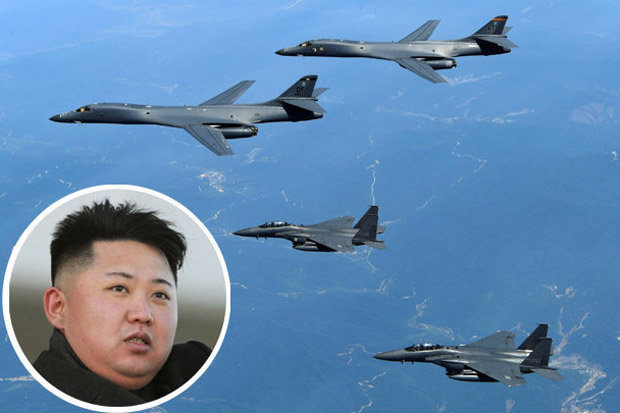 US flies bombers over Korean peninsula after ICBM test | News

The US has flown two bomber jets over the Korean peninsula in a show of force after recent North Korean missile tests, according to a US Air Force statement.
Saturday’s move came after North Korea said it conducted another successful test of an intercontinental ballistic missile (ICBM) on Friday that proved its ability to strike the US mainland, drawing a sharp warning from President Donald Trump.
The flight of B-1B bomber jets was in direct response to the missile test and the previous July 3 launch of the “Hwansong-14” rocket, the US statement said.
The bombers took off from a US airbase in Guam, and were joined by Japanese and South Korean fighter jets during the exercise, according to the statement.
“North Korea remains the most urgent threat to regional stability,” Pacific Air Forces commander General Terrence J. O’Shaughnessy said. “If called upon, we are ready to respond with rapid, lethal, and overwhelming force at a time and place of our choosing”.
The US has in the past used similar flights as a show of force in response to North Korean missile or nuclear tests.

Pyongyang: Entire US in range

The Korean Central News Agency said on Saturday that North Korean leader Kim Jong-un expressed “great satisfaction” after the Hwasong-14 reached a maximum height of 3,725 kilometres and travelled 998 kilometres, before accurately landing in waters off Japan.
The agency quoted Kim as saying that the launch reaffirmed the reliability of the country’s ICBM system and ability to fire at “random regions and locations at random times”, with the “entire” US mainland now within range.
Analysts estimate that the North’s first ICBM in early July could have reached Alaska, and said that the latest missile appeared to extend that range significantly.
Trump condemned the test as a threat to the world, and rejected North Korea’s claim that nuclear power ensures its security.
Japanese Foreign Minister Fumio Kishida said he held telephone talks with US Secretary of State Rex Tillerson and agreed on the need to put “the heaviest possible pressure” on North Korea.
“We confirmed that we will closely cooperate in adopting a fresh [UN Security Council] resolution, including severe measures, and working on China and Russia,” Kishida told reporters.
China, the North’s main ally, said that it opposed North Korea’s missile launches, which it said violate UN Security Council resolutions designed to curb Pyongyang’s banned nuclear and missile programmes.
“At the same time, China hopes all parties act with caution, to prevent tensions from continuing to escalate,” China’s foreign ministry said in a statement on Saturday.
However, Trump said he was “very disappointed in China”.
In messages on Twitter, he wrote: “Our foolish past leaders have allowed them to make hundreds of billions of dollars a year in trade, yet…
“…they do NOTHING for us with North Korea, just talk. We will no longer allow this to continue. China could easily solve this problem!”
Kiyul Chung, professor at China’s Tsinghua University, said China has few options and is doing all it can.
“Chinese participation in UN sanctions against [North Korea] has been [significant],” he told Al Jazeera. “What Trump says doesn’t mean much.”
He explained that besides pressuring China, the US has few options.
“I don’t think China will do more, because there is nothing more it can do,” he said.

Washington and its allies have watched with growing concern as Pyongyang has progressed towards its goal of having all of the US within range of its missiles, to counter what it labels as US aggression.
There are other hurdles, including building nuclear warheads to fit on those missiles and ensuring reliability.
But many analysts have been surprised by how quickly Kim has developed North Korea’s nuclear and missile programmes, despite several rounds of UN Security Council sanctions that have squeezed the impoverished country’s economy.
North Korea is not believed to have yet developed the technology to miniaturise a nuclear weapon to fit in a missile’s warhead.

The Threat of Nuclear War: Revelation 16

More than 300 Dead By the Iranian Horn

The Sixth Seal by Nostradamus (Revelation 6:12)